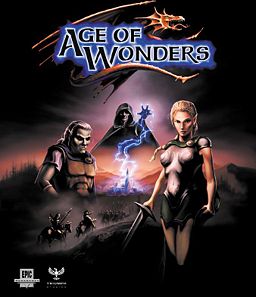 Age of Wonders is a turn-based strategy PC-game released by Triumph Studios in 1999. Originally titled World of Wonders, the game incorporates elements of a fantasy RPG with 4X strategy. It has often been compared to Heroes of Might and Magic and considered the Spiritual Successor to Master of Magic. Age of Wonders was followed by sequel Age of Wonders 2: The Wizard's Throne and a stand-alone expansion AoW: Shadow Magic.

The setting is a classical High Fantasy one, there were initially twelve races divided by alignment, the follow-ups replaced some and added three more:

The elves once ruled a peaceful empire over the other civilized races in the Valley of Wonders. This golden age ended when hordes of humans arrived from across the sea, conquering everything in their path, killing the elven king and his court, and claiming the Valley for themselves. Years passed; the evil races began to spread unchecked by the elves, warfare became constant, and the undead were awakened in a desperate attempt to win a war. During this time, two organizations came to power led by the heirs of the elven kingdom and sibling rivalry. Julia becomes leader of the Keepers, an organization attempting to foster cooperation, diplomacy, and contain the belligerent races. Meandor founds the Cult of Storms, dedicated to reclaiming his throne and exterminating humanity.

The game features kingdom-building similar to Civilization; establishing cities, constructing infrastructure, and creating armies. In addition there neutral structures around the map such as gold mines or watch towers, often guarded by independent forces, providing ongoing income or one-time benefits like new spells. Tactical combat involves stacks of units performing basic movement/combat and special abilities like spells or fire breath. Any forces in adjacent hexes to the defender will be included, allowing for multiple stacks to fight a battle.

Tropes used in Age of Wonders include:

Retrieved from "https://allthetropes.org/w/index.php?title=Age_of_Wonders&oldid=1912983"
Categories:
Cookies help us deliver our services. By using our services, you agree to our use of cookies.