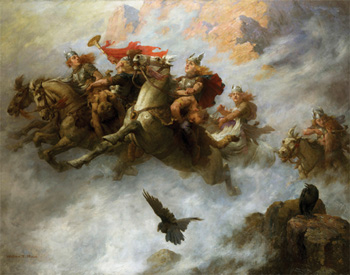 The Valkyries are a group of figures from Norse Mythology, fierce women who served the Norse gods. They were sometimes depicted as Psychopomps, derived from their name which means Chooser of the Slain. (Other times, they were depicted as actual killers of mortal warriors, from their name Chooser of the Slain taken to its logical conclusion.) What sets them apart is that their classical depiction has become so ingrained that it is copied, parodied, and even outright inverted.

Sometimes seen as related to the Irish Morrigan. Not to be confused with the Tom Cruise historical drama and real life event to assassinate Adolf Hitler Valkyrie, which takes its name from these figures, as does the iconic VF-1 Valkyrie of Super Dimension Fortress Macross and the experimental XB-70 Valkyrie supersonic bomber.

Examples of Valkyries include: