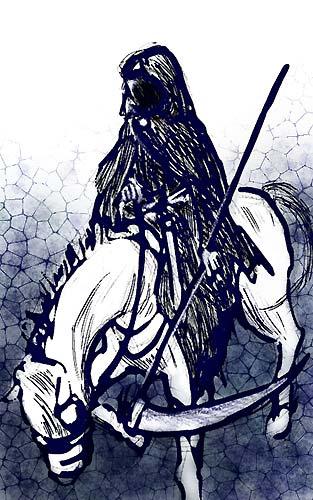 The Stealer of Souls, Defeater of Empires, Swallower of Oceans, The Ultimate Reality, Harvester of Mankind, atop his mighty steed, Binky

The mascot of death. The nature and purpose of the Grim Reaper actually varies between two different versions: one version describes him as a simple guide, the being who takes you to the next world after you die (the fancy word for this is Psychopomp); the other sees him as the actual entity of death—you die when he touches you. Either way, he is generally seen as a tall skeletal spectre in a black hooded robe, who wields a Sinister Scythe when he visits commoners and a sword when he visits royalty, though the scythe is the most common of his symbols. He is also often shown with an hourglass as a symbol of elapsing life. These dual accouterments are Older Than Steam, but both were drawn from the ancient Greco-Roman god Χρόνος (Chronos). This god (not a god of death), in turn, was drawn from the Ur Example of the Sassanid sect's Zoastrian god Zurvan Akarana. He is sometimes described as mute, and in some accounts you can challenge him to a game of chess for the right to stay alive. Often he picks up the characteristics of Charon, the boatman of the river Styx in Greek theology. But even these characteristics are filtered through a Christian veil.

The Grim Reaper, in his days as a frequent figure of folk tales, was originally used as a menacing, sombre symbol of the inevitability of death. He first appeared in Western art and folklore with the outbreak of the mid-fourteenth century plague epidemic (known to us as the Black Death).

As with most folklorish characters, he is no longer taken seriously and may even come across as benign, or played for laughs as a bored civil servant type. Even when he's still treated as a menacing figure, there will be humor involved. Still other representations of death forgo the neutral and buffoonish guise entirely and make Death a God of Evil that must be fought.

Conversely, actually meeting him may reveal Don't Fear the Reaper is wiser; dying is not as bad as feared.

A frequent modern variation is the notion that instead of the Grim Reaper, you can be a Grim Reaper - that it's a position offered to certain people after they die.

When this concept was imported to Japan in the 19th century, they translated the name as Shinigami (literally spirit of death, or god of death[1]). Japanese media then proceeded to play with the character to the point that many shinigami no longer have anything in common with the Grim Reaper, aside from the name. Shinigami are more typically spirits associated with death, rather than being the singular Anthropomorphic Personification thereof. Thus, the concept of being able to defeat or kill Death in combat (Castlevania) or Grim-Reaper figures themselves being able to die (Death Note) can seem absurd to Western viewers.

A subtrope of Psychopomp. Compare to Horsemen of the Apocalypse for when the rest of the Four Man Band show up, and Afterlife Express, when the Grim Reaper is or rides on a vehicle, especially a train. See also Enemies with Death and The Problem with Fighting Death. As with most public services, expect hilarity to ensue if Death Takes a Holiday. A more kinder interpretation may portray him as The Sacred Darkness.

Examples of The Grim Reaper include:

]
Retrieved from "https://allthetropes.org/w/index.php?title=The_Grim_Reaper&oldid=1953635"
Categories:
Cookies help us deliver our services. By using our services, you agree to our use of cookies.