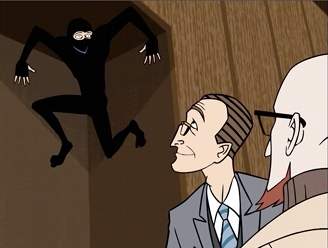 Well, someone flunked out of "Hidden Ceiling Cling 101" in Ninja School.

"Hey... did ya ever get da feelin' you was bein' watched?"
—Bugs Bunny, Hair-Raising Hare

Don't look around, pretend we're talking about Cool Cars or something.

Guy behind us. Behind us, right? Right behind y-- don't look!

Make to go to the bathroom and then slip out the back. I'll go to pay at the front; they won't see us if we sneak out the restroom window.

How do I know? I'm a Badass swordsman who knows Gun Kata, the camera went Eyedscreen, and my Spider Sense is tingling. Telepathy. Is that what you want to hear? Now get moving before They realize we're onto them.

Examples of Being Watched include:

Rena: Someone is quietly spying on you from afar. Someone is constantly shadowing you. Someone is always right behind you, looking at you. Eventually the footsteps will be a little offbeat from yours, and you'll hear one extra. And then, when you turn off the light and climb into your futon, it will stare down at you from the base of your pillow. Silently, patiently, waiting until you've accepted your sins.

Bill: You ever get that feeling when you know you're being watched?

Ellie: There's the shed. We can make it if we run.
Muldoon: Well, we can't.
Ellie: Why not?
Muldoon: We're being hunted. A velociraptor, in the bushes straight ahead.

Mayor of Who-Ville: Hey, hon, did you ever get the feeling that you were being watched, and that maybe that thing watching you is... ehhh, a giant elephant?

Karen Hall: That's why I had that horrible feeling I was being watched.

"Hey! You there! Peeping at my thoughts, huh? I know you are! Well, if you think you can mind-control me or something, you're sorely mistaken!"

Bugs Bunny: Listen, Dracula... Have you ever had the feeling you were being watched? Like the eyes of strange things are upon you? Look, out there in the audience...

SpongeBob: (while being followed) It feels like... someone... wants to sell me something!

Edd: Ed, please! Someone may be watching...

Now, time to give them a good poke in the eye.