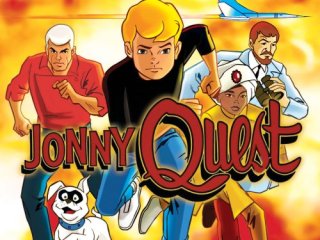 Doug Wildey created this 1964 animated Adventure Series, the first produced by Hanna-Barbera and the first to use realistically drawn human characters in Science Fiction or adventure settings. The series aired in prime time on ABC.

A second Jonny Quest series was syndicated in 1986-87, with two new characters: Jessie Bradshaw, whose father was a colleague of Dr. Quest, and Hard Rock, a man made of living stone. This series culminated in two made-for-TV movies - Jonny's Golden Quest and Jonny Quest vs. the Cyber Insects - which introduced Race Bannon's daughter, Jessie (not the same character as Jessie Bradshaw).

Cartoon Network made some changes to the format when it debuted Jonny Quest the Real Adventures in 1996. New characters included Race's daughter Jessie (not the same as the non-canon Jessie above), the recurring villains Jeremiah Surd and Ezekiel Rage, and the twin daughters of Dr. Zin (who, of course, was from the original series). Also, the characters had access to Questworld, a virtual reality realm represented in most episodes by 3-D computer animation. According to this Wikipedia article, development began in 1992, but the series went through three production teams over the next four years.

A Live Action Adaptation of Jonny Quest was announced in August 2007, with Peter Segal directing Zac Efron as Jonny and The Rock as Race Bannon. In December 2013 Segal made it clear the project was far from dead, and that he was hoping to make it his next film; whether Efron and The Rock are still attached is unknown.

Not to be confused with Journey Quest.

Tropes used in Jonny Quest include:
Retrieved from "https://allthetropes.org/w/index.php?title=Jonny_Quest&oldid=1928220"
Categories:
Cookies help us deliver our services. By using our services, you agree to our use of cookies.