Everything About Fiction You Never Wanted to Know.
Jump to navigation Jump to search
/wiki/Norio Wakamotocreator 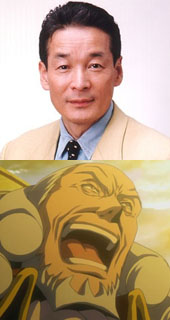 If there's one voice actor who is extremely pigeonholed, but is just so awesome at doing his pigeonholed job that it doesn't matter, this man is that voice actor. Norio Wakamoto was an anti-riot squad officer who saw action in the student protests in the 1960s/70s before he became a voice actor (we assume he just had to yell "HALT, CRIMINAL!" and they'd immediately stop while shouting "YES, YOUR MAJESTY!"), well known for his quality, grandiose voice as a villain. So if you want a menacing, great Big Bad (or any other villainous role), contact him. And his range of villain roles is also quite wide, from manipulating and scheming to The Berserker type. Whether it's of a high position or as an underling (as long as it's no Mook). Beware...they can become Ensemble Darkhorses or Magnificent Bastards greater than the Big Bad himself.

Villains, however, aren't his only forte (though it's undoubtedly what he's really good at). He is also capable of doing humorous, perverted roles or, rarely, heroic types.

Norio Wakamoto is an expert in martial arts, and he will kick your ass.

Also, thanks to his recent role as Social Darwinist and Emperor Charles of Britannia, he has reached a certain Memetic Badass status amongst Western anime fans (by that time, he'd already been considered one in Japan). There are people who state that any anime can turn instantly good if he is participating (or that any character he voices will always be perceived as Badass). It's even gotten to the point where, instead of having him "work his voice to fit a character", they work the character to fit his voice. The man is the Chuck Norris of Anime, with the voice of Brian Blessed[1]

Not just amongst the fans, but he is also very well respected amongst the seiyuu circle, to the point that many have tried doing a 'Wakamoto impression'. For example, this one, as done by Tomokazu Sugita, Takahiro Sakurai, and Yuuichi Nakamura. In fact, there's going to be a competition in 2012 about imitating Wakamoto, to be judged by Wakamoto himself!

Is known as 'Neta ni Ikiru Otoko' on Niconico Douga.

A sample of his voicing can be found here

For his non-villainous roles, here's a bit of his portfolio

ALL HAIL BRITANNIA!!! ALL HAIL OPPAI!!!

Retrieved from "https://allthetropes.org/w/index.php?title=Norio_Wakamoto&oldid=1927592"
Categories:
Cookies help us deliver our services. By using our services, you agree to our use of cookies.