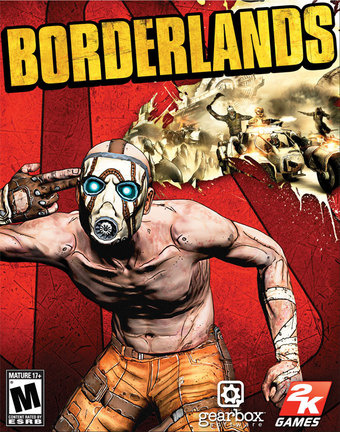 You would too, if your meat was so heavily armed...

Borderlands is an FPS with RPG Elements made by Gearbox Software, the makers of the Brothers in Arms series and the expansion packs for Half-Life, for 360, Play Station 3 and PC. The game takes place on the desert planet Pandora and you choose from four different characters in search of a vault said to contain vast stores of alien technology.

The problem is that this vault is hidden on Pandora: a backwater world where no one wants to live. Except the raiders. A "guardian angel" appears to four mercenaries, who decide to head toward the planet:

But the RPG Elements really show up in its loot system: using a procedural generation program, every weapon you get (and many other items too), is randomized. Everyone's inner Kleptomaniac Hero reacted positively.

There are currently four DLC out right now:

The Zombie Island of Dr. Ned: Dr. Ned, who is totally not his twin brother Dr. Zed wearing a fake moustache, managed to unleash a Zombie Apocalypse upon Jakob's Cove.

The Secret Armory of General Knoxx: A continuation of the main story. Enraged over the loss of the Vault, the decimation of their forces and the death of Steele (though mostly just losing the Vault), the Crimson Lance have decided that the Vault Hunters must die. They send a fresh army of Lance operatives, headed by seasoned General Knoxx, to both take out the Hunters and conquer Pandora for their own. With the help of former Lance Assassin Athena, the Vault Hunters must now fight to destroy the Crimson Lance once and for all, and maybe even get some sweet loot while they're at it.

Claptrap's New Robot Revolution: Due to the Vault Hunters being a massive drain on the economy, Hyperion hires the Interplanetary Ninja Assassin Claptrap to take care of them. Instead, he rallies the Claptraps into rebellion against the humans.

The most recent patch further increases the level cap by 8 for everyone (meaning those who have Knoxx get a cap of 69).

A sequel Borderlands 2, had been announced was released on September 18, 2012.

When editing this page, please do not go into too much detail describing the gun unless it is accessible to everyone. This is All The Tropes here, not the Borderlands section of The Card Chest, which is where every recorded Borderlands gun has been catalogued.

Not to be confused with a much older game set on the Borderlands.

Ain't no rest for the wicked...

Tropes used in Borderlands include:

'Til we close our eyes for good.

Retrieved from "https://allthetropes.org/w/index.php?title=Borderlands&oldid=1956422"
Categories:
Cookies help us deliver our services. By using our services, you agree to our use of cookies.