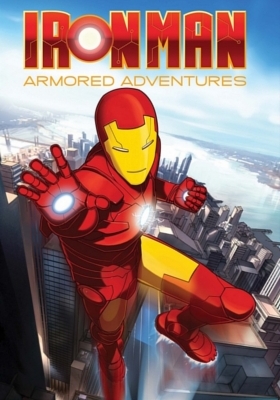 Iron Man is about to shoot you.

Things are bad: Tony Stark's father was just murdered. Tony didn't even get to show Dad his fancy new suit, but luckily it's what allowed Tony to survive the attack on his plane. However, it left his heart permanently damaged. Obadiah Stane took over his father's company and has completely shut Tony out of his family's business. Things only get worse when Tony suspects Stane of being the one behind his father's death, but cannot find any proof to implicate him. Rhodey's running out of excuses for Tony's absences from school, and if all that isn't bad enough, now Tony has to take care of his dad's unfinished business of collecting the five Makluan Rings before the Mandarin obtains their power. Oh, he also has to graduate high school or he loses the rights to inheriting his family's company when he turns eighteen due to a legal loophole. It's almost too much pressure for one person to take.

Iron Man: Armored Adventures is Marvel's current[when?] animated adaptation of the iconic shellhead. Blending together the original comic continuity, the Ultimate continuity, and even the movie continuity, the series manages to distill various aspects from all the previous Iron Man adaptions while still injecting plenty of its own creativity into this fresh and new continuity. There is a great emphasis on story this time around, with Tony Stark traveling across the globe hunting down a group of ancient artifacts, called the Makluan Rings, that his late father was also researching. On his quest, he's aided by various allies and attacked by various enemies, many of whom have past ties to his late father, as he searches for a way to finish the work that his father started and save his family's company before it's too late.

The show was launched in April, 2009 and currently[when?] airs on Nicktoons Network, where it is one of the channel's most popular series. It has been praised by many critics and fans alike for its fresh writing and unique cel-shaded animation style. Season two, produced by Method Animation in France, began airing in July 2011.

Has a Recap page.

Tropes used in Iron Man: Armored Adventures include:
Retrieved from "https://allthetropes.org/w/index.php?title=Iron_Man:_Armored_Adventures&oldid=1743076"
Categories:
Cookies help us deliver our services. By using our services, you agree to our use of cookies.