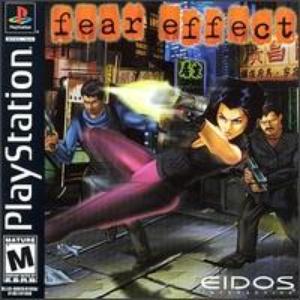 An action/adventure/horror game published by Eidos and released midway through the original PlayStation's life cycle, the game is the tale of three merciless mercenaries—Hana, Glas, and Deke. The daughter of a rich and powerful businessman has been kidnapped, and the trio has been hired to find her. Although, the three of them plan to ransom her back to her father if all goes well. However, everything is not what it seems to be, and the kidnapped girl in question is the key to an epic ordeal—possibly involving the fate of the world itself.

The game spawned a prequel, Fear Effect 2: Retro Helix, which shows how the three main characters met, and introduces Rain, Hana's love interest. Their mission in this game is to stop an epidemic of a highly dangerous disease.

The games feature typical action/adventure elements (run and gunning enemies, stealth sequences, keycard-fetching and puzzle solving). What is somewhat unique is each character you control has a "fear/confidence meter". Essentially your life bar, however, there are no medicines/health packs in the game. By solving puzzles and taking out foes quickly, your character's meter stays green for longer, or recovers if he/she took damage. When you screw up, the meter goes down. When it's red, your character has all the defense of wet paper.

There was to be a third game for the PS2 (Inferno), but it was cancelled.

Fear Effect Sedna, made by Sushee and co-written by the Fear Effect series' original writer, was released in March 2018. A remaster of the first game, done by the same developer as Sedna, was also released in 2018.

No matter how fitting it sounds, Fear Effect isn't what you get for playing too much F.E.A.R., although coincidentally, they're both horror games.

Tropes used in Fear Effect include:
Retrieved from "https://allthetropes.org/w/index.php?title=Fear_Effect&oldid=1610989"
Categories: