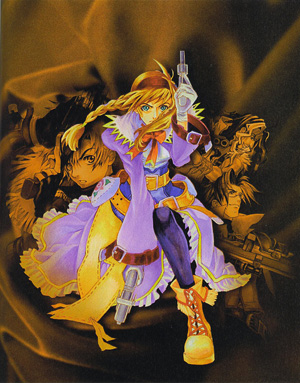 Filgaia is a world on the brink of collapse. Those who roam this wasteland in search of fortune or fame are known as Drifters. To protect themselves, these Drifters equip guns known as ARMs (Artifact from Ruins' Memories) that are controlled by the will of their wielder.

On a train, four such Drifters clash over a mysterious artifact known as the Arc Scepter: Virginia Maxwell, a greenhorn Drifter following in the footsteps of her Disappeared Dad; Jet Enduro, an experienced but cold-hearted Drifter with Identity Amnesia; Gallows Carradine, a crass and lazy Magical Native American running away from his duties to his tribe; and Clive Winslett, a Bounty Hunter and Adventurer Archaeologist with a cool disposition and a mean sniper rifle.

Soon afterward, they decide to form a team (with a lot of prodding from Virginia) and track down a priceless treasure known as the Eternal Sparkle. This brings them into conflict with rival Drifter Janus Cascade, a Similar Squad of Drifters called the Schrödinger Family (led by Virginia's Foil, Maya Schrödinger), and eventually an Ancient Conspiracy threatening to consume both the past and future of Filgaia.

Wild ARMs 3 gives one the impression that its creators were told to make a JRPG, but had never played a JRPG before. Far from making it a bad game, this means that they approached the genre from a new direction and did a lot to shake up old cliches:

An interesting tidbit - this game was the first not to be localized by Sony. Squaresoft, of Final Fantasy fame, performed the localization process, which was noticeably of much higher quality than the Blind Idiot Translations of the first two. Unfortunately, this also created some continuity errors with certain names that were intended to be references to the first two games. Future entries were handled by XSEED (and in one case, Agetec).

Tropes used in Wild ARMs 3 include:
Retrieved from "https://allthetropes.org/w/index.php?title=Wild_ARMs_3&oldid=1967348"
Categories:
Cookies help us deliver our services. By using our services, you agree to our use of cookies.