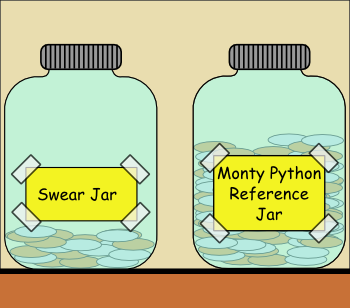 $1 for a standard Monty Python reference, $2 for a Holy Grail reference: A must for Fantasy Tabletop Gamers.

Any Meme that has fallen out of favor with pop culture, or at least the segment it was popular in. Either the meme was simply forgotten over time, it was one of many Notable Commercial Campaigns that got discontinued, it was associated with something that fell victim to changing politics, it was a Catch Phrase that got repeated too much, or something else.

Note this is not about whether the meme was any good or not. Most appealed to enough people in the first place to become memes. It's just that some aren't looked on too fondly after the fact. Until the Nostalgia Filter kicks in, some of these memes are Deader Than Disco. A meme appearing on any of the old media is generally considered its dying breath, at least to the internet-at-large.

This can also use Hypocritical Humor, with someone complaining about a meme, but in the form of the meme.

Contrast Cliché, which is what some luckier memes settle into.

Examples of Discredited Meme include:

Retrieved from "https://allthetropes.org/w/index.php?title=Discredited_Meme&oldid=1933267"
Categories:
Cookies help us deliver our services. By using our services, you agree to our use of cookies.