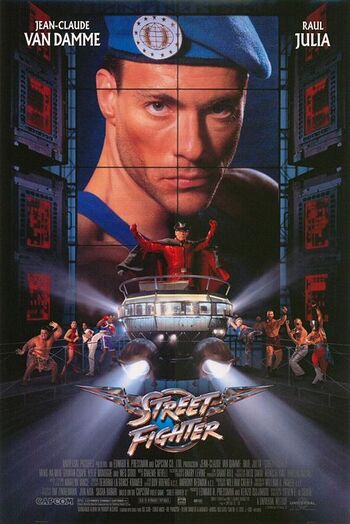 In the remote southeast Asian country of Shadaloo, the power mad dictator General M. Bison (Raul Julia) is trying to usurp power and take over first the country, then the world. OF COURSE!!! To fund his megalomaniacal schemes, he's captured several dozen relief workers, who totally are not from the Red Cross, and is holding them hostage for the sum of twenty billion US dollars. It is up to the Allied Nation forces, led by Col. William F. Guile (Jean-Claude Van Damme), to get in there, take out Bison, and rescue the hostages. And they have three days to do so before hostages start dying. His immediate subordinates include Lieutenant Cammy (Kylie Minogue). and Sergeant T. Hawk (Gregg Rainwater).

If you're even slightly familiar with the Street Fighter storyline (what little it has, anyway), you'll notice something seems a little... well, off.

The producers had some strange ideas about how to work the complex characters and storylines in the live action production. They didn't get a lot of them right, to say the least.[1] The film is sometimes lucky enough to go in the So Bad It's Good category due to the late Raul Julia's portrayal of M. Bison, who took the job knowing he was dying of stomach cancer and let his children pick out which movie would be his last, and apparently wanted to go out on a loud note for his final performance. Unfortunately, there are plenty of people who don't think this was enough to save the movie and continue to insist it's so bad it's just bad. Considering all the memes that stemmed from it, its most likely a Cult Classic.

Aspects of the movie were expanded on in the cartoon Street Fighter, which came out shortly after the film.

It's also been shown on G4's "Movies That Don't Suck" block, while Chris Gore makes snide remarks over the end credits.

Fifteen years would pass before another live-action Street Fighter film would be made. That one is called Street Fighter: The Legend of Chun-Li.