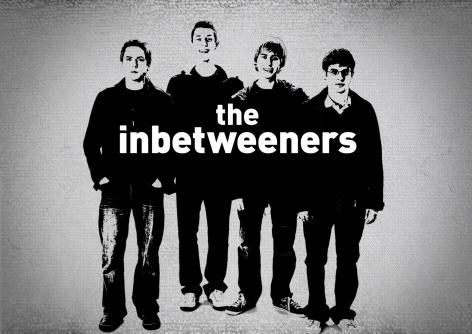 Forget Skins. This is what being 16/17 in modern Britain is actually like.

The Inbetweeners (2008-2010) is a sitcom for E4 that focuses around the lives of four students in sixth form. Will, a briefcase carrying nerd with a temper problem; Simon, a Nice Guy with perpetual lust for his next-door neighbour; Neil, a total moron with a (probably) gay dad; and Jay, a Casanova Wannabe. Together these four mismatched teens get into the everyday problems accompanying all sixth form students, as they try to sway girls into their beds and be recognised as some of the cool kids. Along with a lot more problems not usually encountered by sixth form students. Lots more problems.

The show airs on BBC America in the United States, even though it's not a BBC production.

In August 2011 a The Inbetweeners movie was released in British & Irish cinemas.

Tropes used in The Inbetweeners include:

The Inbetweeners Movie provides examples of:

Retrieved from "https://allthetropes.org/w/index.php?title=The_Inbetweeners&oldid=1773401"
Categories:
Cookies help us deliver our services. By using our services, you agree to our use of cookies.