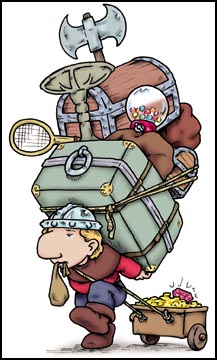 Nodwick is Print-and-webcomic by Aaron Williams, the same author as PS238 and Full Frontal Nerdity. Focuses on what can only be called a misadventuring group in a fantasy world based loosely on Dungeons & Dragons settings. The party consists of a less than worldly cleric named Piffany; a completely expendable henchman, the titular Nodwick; a power-hungry wizard named Artax; and a brawler named Yeagar. The print comic followed a story arc concerning the party's battle with an evil god called Baphuma'al, while at the same time the online variant and its apperances in Dragon Magazine provided shorter a-gag-a-week stories that were unrelated to the goings-on of the print story.

After having completed its print run in 2008, the comic is currently on hiatus as Mr. Williams focuses on PS238 and Full Frontal Nerdity. The author has instead begun to upload the story from the print comic into the website for free in lieu of new strips, at a rate of three pages per week.

Tropes used in Nodwick include:
Retrieved from "https://allthetropes.org/w/index.php?title=Nodwick&oldid=1825514"
Categories:
Cookies help us deliver our services. By using our services, you agree to our use of cookies.