Everything About Fiction You Never Wanted to Know.
(Redirected from Boys Love)
Jump to navigation Jump to search 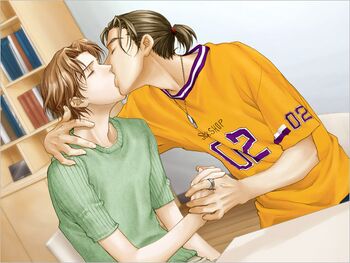 Why? Because Guy-On-Guy Is Hot and that's all there is to it.[context?]

Also called Yaoi, Boy's Love is a subgenre of romance focusing on male homosexuality, for a presumptively female audience. In a typical plot, two boys fall in love and the story shows their progress as a couple. Sometimes it's just part of the scenery, although most series directly foster what the audience expects and likes.

Boys' Love series are made by women for women, though it's not uncommon for them to draw a male gay/bisexual audience. Because of this, most Boys' Love works have idealized male characters who are sensitive and nurturing. They are usually drawn in a romantic style and exist in a world where homosexuality is considered no more unusual or transgressive than heterosexuality. The genre includes all ranges of explicitness, one of the reasons stories aimed at a more mature audience don't make it to television often.

It's sometimes conjectured that gay romance appeals to women because non-female characters aren't as 'threatening' to the audience, nor are the social boundaries the same. Of course, it could also simply mean that if one hot guy is good, two or more are even better. It's interesting how some viewers, especially male ones, don't get that, even though the opposite is a well-known phenomenon.

The stories are stereotyped as having a high degree of Melodrama, especially within the younger teenager reading audience; something exploited by the manga translation market. The dynamic of an aggressive partner and a submissive one is so common in the genre that they have become the archetypes for the genre (but remember, Tropes Are Flexible!). Some Slash Fic writers go so far as to feminize the shorter guy to fit this dynamic. Many series that deal with close friendship usually develop a non-canonical Boys Love fandom.

See Boys Love Genre/Notes for a list of standard character types and Boys Love Tropes for tropes associated with the genre.

For the corresponding genre aimed at a gay male readership, see Bara Genre. For the Distaff Counterpart to this genre, see Yuri Genre.

Examples of Boys Love Genre include:

Use of BL manga/anime itself as a trope (for uses of BL tropes outside BL, see Yaoi Guys)

Retrieved from "https://allthetropes.org/w/index.php?title=Boys_Love_Genre&oldid=1940597"
Categories:
Cookies help us deliver our services. By using our services, you agree to our use of cookies.