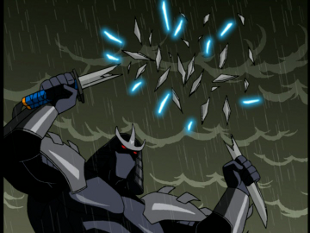 Man, Leo's going to get piss-- what? You kicked his ass? Never mind.

While the heroes get kicked around a lot, after a certain point we don't worry so much. But if you want to really show off how badass a new antagonist might be, not only should they beat the hero in a fight quickly, but they should hurt their pride. The easiest way to do that is smash up their signature weapon/accessory.

Although this is sometimes a cheap and inexplicable device to show off a new transformation, more often the hero is figuratively neutered, and has to deal with the emotional aftermath. Even if he has a buddy who can fix it up, that won't be as important as him coming to grips with either his reasons for fighting or just learning not to be such a clod about it. If this is a video game, it's by far the easiest way to really piss off the player along with their virtual avatar.

Naturally, this is much more emotional for the character if they also have a Empathic Weapon and even worse if it's a Equippable Ally or other Living Weapon.

May lead to Reforged Blade, Give Me a Sword or even It Was a Gift

In a mundane "real world" series without magic or swords, the easiest way for a villain to do this is to trash the hero's ride.

Examples of Wrecked Weapon include:

Ye see my broken sword--
But never the blades she broke;
...
Surely he fights again, again;
But when ye prove his line,
There shall come to your aid my broken blade
In the last, lost fight of mine!

The Fifth Doctor: I feel as though you've just killed an old friend.

Prester: You shot my gun!
Sumatera: Look, there's no need for us to be shooting at each other. I am certain there's a solution to this situation which doesn't involve any more gunfire...
Prester: WHY ARE YOU BARGAINING WITH THE MAN WHO SHOT MY GUN!!

Batman: He trashed my car, Alfred. Between a couple of guys, that's real personal.