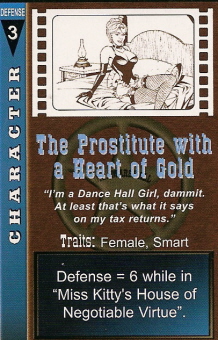 This is particularly true if the character in question is in the "street-walker" category - they are generally the most poor and desperate, have gone through the most embittering experiences, and frequently have debilitating drug addictions that wreak havoc on their looks and their personalities. Not that you can tell, of course, as Hollywood hookers tend to be gorgeous and never suffer from meth bugs or malnutrition.

This trope is Older Than Feudalism, dating all the way back to Aspasia with Pericles.

This trope is only about prostitutes and other professional sex workers. For people who have casual sex for the pleasure of it rather than for money, see instead Good Bad Girl and Ethical Slut. However, the tropes can overlap when it comes to the most benevolent forms of sex work. Both are liable to be against any form of sex work that is exploitative and/or emotionally damaging, but might consider some forms relatively safe and thus approve of them.

Sometimes these women have suffered from the horrors of prostitution, and sometimes even women violently forced into prostitution can fit into this trope.

Some may take pity on a protagonist and offer him or her a place in This Bed of Roses.

Examples of Hooker with a Heart of Gold include:

Retrieved from "https://allthetropes.org/w/index.php?title=Hooker_with_a_Heart_of_Gold&oldid=1914754"
Categories:
Cookies help us deliver our services. By using our services, you agree to our use of cookies.