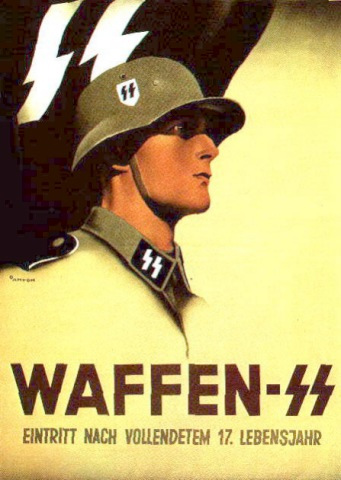 The Wehrmacht are Germans. The SS are Nazis.

State Sec(urity) is something akin to the Secret Police, but on steroids. The secret agents and cloak and dagger stuff are but one subset of this organization. Other divisions can include a full-blown paramilitary division to keep the regular army in check and act as a regime protection force, a political and administrative division, a propaganda division, an R&D division, you name it.

The trope gets its name from the Honor Harrington book series, where State Sec has its own Space Navy, Space Marines, Army, various intelligence organizations, etc... This was in turn inspired by the Real Life Schutzstaffel of Nazi Germany, which had the elite Waffen-SS which was pretty much a second German Army for the Nazi party, the Allgemeine-SS which ran the damn thing, and many more. A full list can be found at Wikipedia. Needless to say, this trope tends to coincide with Putting on the Reich a lot.

State Sec is autonomous from the regular government and military. This and favoritism can lead to Interservice Rivalry. Often, the organization is on the side of evil, being used as the personal army of the main villain. However, this is not always the case.

Also, it's very common in Real Life and has been throughout history. Mega Corp is State Sec's counterpart in the economic sphere. NGO Superpower is when a Non-Governmental Organisation wields similar power.

Examples of State Sec include: