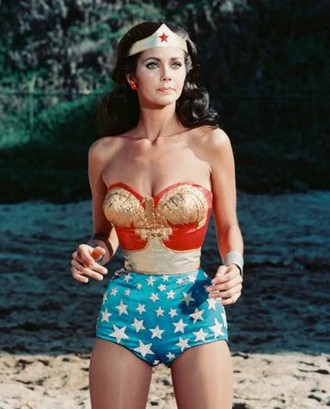 Wonder Woman was an American live-action TV series that originally aired from 1975 to 1979, based on the comic book superhero Wonder Woman. It starred Lynda Carter as Wonder Woman and Lyle Waggoner as Steve Trevor. While often regarded as campy and cheesy by modern standards, it has become something of a Cult Classic.

The movie-length pilot episode and first season aired on ABC, and were set during World War II.

From the second season, the series moved to CBS, was retitled The New Adventures of Wonder Woman, and the setting moved to the present day (i.e. The Seventies). Wonder Woman, being an ageless Amazon, hadn't aged a day, while Lyle Waggoner switched to playing the remarkably familiar-looking Steve Trevor Jr.

An unrelated failed Pilot Movie was broadcast about a year earlier, in 1974, starring Cathy Lee Crosby as a non-powered Wonder Woman in a very loose adaptation (verging on In Name Only). Even earlier, in the mid-1960s, William Dozier produced a five-minute Wonder Woman screen test which portrayed Diana as living with her mother.

A 2011 TV pilot was passed on by NBC. Adrianne Palicki, known for her role in Friday Night Lights, was to be the new Wonder Woman but a poor pilot doomed the effort and the fanbase wasn't pleased with the many changes that radically transformed the superhero into a violent Anti-Hero.

Tropes used in Wonder Woman (TV series) include:
Retrieved from "https://allthetropes.org/w/index.php?title=Wonder_Woman_(TV_series)&oldid=1928387"
Categories:
Cookies help us deliver our services. By using our services, you agree to our use of cookies.