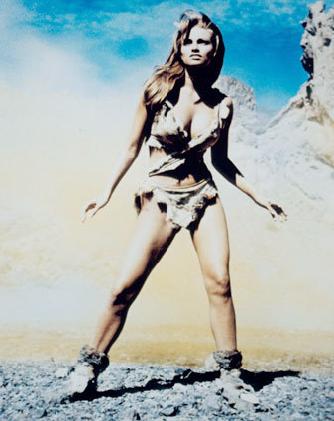 The life of a Noble Savage can be pretty hard, what with all the dirt, parasites, lack of proper medicine, sanitation, nutrition, etc. It's not surprising that a good number of cavemen are nasty, brutish, and short. But their women more than make up for it. Your average cavewoman has the body of a pinup model, with long legs, shapely hips, a flat stomach, thin arms, and an impressive set of bam-bams, all nicely framed by a few scraps of animal hide, regardless of the weather. For extra bling, she may even wear a Feather Boa Constrictor. Her skin is clear and fresh; her teeth are perfect; her hair is no more than artfully tousled. She has no body hair whatsoever, and no cuts on her legs despite shaving with what could only be a jagged rock. Her features often look suspiciously like she's wearing expertly applied modern cosmetics rather than, say, clay and crushed berries. It's enough to make you wonder why we crawled out of the Stone Age.

When a woman or girl from prehistory or from an uncivilized clime is depicted as a ravishingly sexy bombshell, she is a Nubile Savage.[1] Savage men can also be examples of this one, especially if they're impressively muscled and garbed in a leopard-skin loincloth. Or less.

Of course, if you'll watch a National Geographic-type documentary, you'll quickly see that women in cultures removed from civilization, while often topless, do not generally resemble Hollywood models. To start, well, Duh, wherever you're looking they're going to have the splay of mainly average-looking people. To the last point, that's from our perspective, anyway (they have rather different standards of beauty, after all). They are also real people, and thus not pre-approved for attractiveness and nudity by a casting director.

The standard look for The Chief's Daughter and Jungle Princess. Less standard but still common for the Indian Maiden.

Examples of Nubile Savage include:

The series penchant for Green Skinned Space Babes and various Anvillicious messages about tolerance led to quite a few Nubile Savages, but a notable one is in The Paradise Syndrome, where Kirk gets Amnesia and is believed to be divine by a group of Native Americans In Space. He is promptly married to The Chief's Daughter, Miramanee, who plays the Nubile Savage role to a T.

Retrieved from "https://allthetropes.org/w/index.php?title=Nubile_Savage&oldid=1727517"
Categories:
Cookies help us deliver our services. By using our services, you agree to our use of cookies.