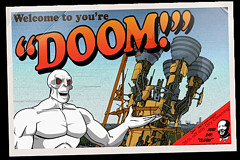 Why does it say "Welcome to you are 'Doom!'"? What does that even mean, and why, for God's sakes, is "Doom!" in quotes? Is this some sort of ironic doom?!

Killface is a super-villain with dreams of blasting the planet Earth into the sun. One problem, he wants to announce his intentions to the world and show the masses the doomsday engine ("The Annihilatrix") that will bring about their doom. And since he doesn't have the technology to hijack the airwaves, let alone the money to purchase airtime to announce his scheme, he's pretty much screwed.

On the opposite end of the spectrum, there is Xander Crews, a spoiled sociopath of a "super-hero" named "Awesome-X" who has just executed his last remaining arch-nemesis and is now being pressured to retire by his advisor Stan, so he can finally get around to running the family business. Needless to say, after getting his hands on a promotional post-card designed to announce Killface's plans, Xander sees the perfect foil for his toy line.

Sadly the show was Too Good to Last.

In the end the production company, 70/30 Studios, shut down some time after and the creative team behind the show moved to the FX Network, where they produced Archer.

Tropes used in Frisky Dingo include:

Retrieved from "https://allthetropes.org/w/index.php?title=Frisky_Dingo&oldid=1854285"
Categories:
Cookies help us deliver our services. By using our services, you agree to our use of cookies.