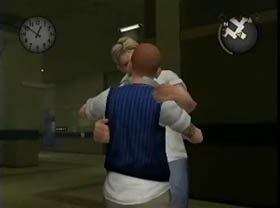 Jimmy Hopkins, making the Gay Option work for him.

Oftentimes in video games, the option exists for the main character to pursue a romantic relationship with some other character. This more often than not happens in more open-ended games, such as RPGs and Wide Open Sandbox games like Grand Theft Auto, rather than games that follow a tight, "every note must be hit" plot, where any romance happens at the behest of the story. As video games are traditionally a medium for males, and most males are heterosexual, most of the romance happens between a male character and a female NPC of the player's choice.

In some cases, however, game designers have begun to realize that even though guys may be the primary audience for video games, girls play too, and not all the male players are straight. And as an interactive medium, it's possible to include content that can please those interested in non-heterosexual content while still giving the primary audience the option of skipping it. This means that games that include romance have occasionally allowed the main character the option to romance a few NPCs who happen to be gay (or, more frequently, bisexual) and who could theoretically desire the main character's bod. This is what we call the Gay Option.

For games where homosexuality is not just an option but the game itself is themed on it, see the video game sections of Yuri Genre (for lesbians) and Boys Love Genre (for gay males). This may or may not overlap with Optional Sexual Encounter, since a game won't always go that far.

No real life examples, please; Real Life is not a video game.

Examples of Gay Option include:

Games and series offering both

Choose Your Own Adventure

Retrieved from "https://allthetropes.org/w/index.php?title=Gay_Option&oldid=1948164"
Categories:
Cookies help us deliver our services. By using our services, you agree to our use of cookies.