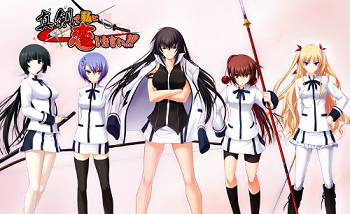 From left to right: Mayucchi, Miyako, Momoyo, Wanko, and Chris. Together, They Fight Crime!

Maji de Watashi ni Koi Shinasai! ("Please Love Me Seriously!" in English, abbreviated MajiKoi) is a Visual Novel H-game, and Minato Soft's second work. Released in 2009, MajiKoi tells the rather light-hearted tale of the adventures of seven Childhood Friends, the self-styled Kazama Family, and the group's two newest additions as they run amok in their School of Hard Knocks. A Slice of Life work chock full of comedic tropes, MajiKoi nevertheless manages to drop a Drama Bomb here and there, and tackles some somewhat serious subjects like life goals, the meaning of friendship, and redemption.

The anime aired as part of the Fall 2011 Anime and a sequel, Maji de Watashi ni Koi Shinasai! S, was released in January 2012. The sequel adds more heroines, and more scenes to the already existing heroines.

US residents can view the anime legally at Crunchyroll.

Tropes used in Maji de Watashi ni Koi Shinasai! include:
Retrieved from "https://allthetropes.org/w/index.php?title=Maji_de_Watashi_ni_Koi_Shinasai!&oldid=1899679"
Categories:
Cookies help us deliver our services. By using our services, you agree to our use of cookies.