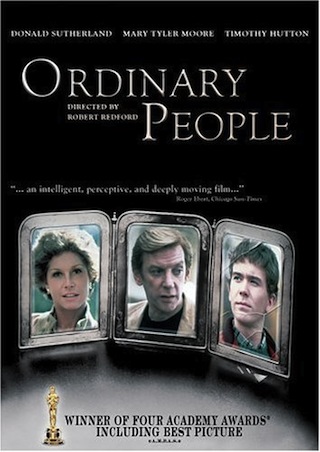 A 1976 novel by Judith Guest, Ordinary People was brought to the screen in 1980 by Robert Redford in his directorial debut. That film, starring Timothy Hutton, Donald Sutherland, and Mary Tyler Moore, won four Oscars, including Best Picture.

The eponymous Ordinary People are the Jarrett family of Lake Forrest, Illinois. They consist of Calvin the father, Beth the mother and their son, Conrad. Their elder son, Buck, was taken out of the picture in a sailing accident by the time the story opens. Conrad, who was with Buck during the fatal accident, was committed to a psychiatric hospital for four months after he attempted suicide out of grief. When he's released, we see just how Buck's death has affected the family. It's not pretty in the least bit. Also in the picture is Dr. Berger, Conrad's psychiatrist, who might be able to help Conrad, and ultimately the family itself, come out of its shell.

Not to be confused with non-magical people.

Tropes used in Ordinary People include:
Retrieved from "https://allthetropes.org/w/index.php?title=Ordinary_People&oldid=1830191"
Categories: