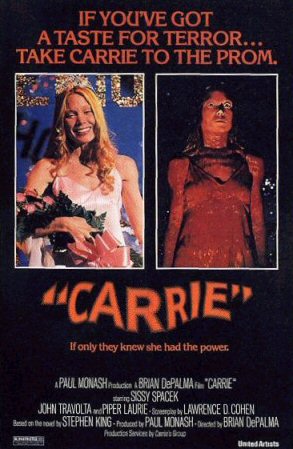 Carrie White -- making people afraid to pick on "that girl" since 1974.

A novel of a girl possessed of a terrifying power.

Published in 1974, Carrie was the first published novel by author Stephen King; it was adapted into a classic Horror film in 1976 by Brian De Palma. The story follows the life of high school outcast Carrie White, a young teenage girl who has no friends at school and is endlessly tormented by her classmates and by her own mother, a raving Christian fanatic named Margaret. After being humiliated in the school shower while having her first period, Carrie learns that she possesses potent telekinetic powers, allowing her to move objects and knock people down with her mind. One bully in particular, Chris Hargensen, is suspended and barred from the upcoming prom for the incident involving Carrie. Feeling that Carrie is to blame for the situation, Chris plots revenge against her.

In the meantime, Sue Snell (one of Carrie and Chris' classmates) feels that what she and her friends did to Carrie was wrong and asks her athlete boyfriend, Tommy Ross, to take Carrie to the prom as a form of atonement. Chris finds out about this and sees an opening for one of the greatest pranks in school history: she and her friends will rig the ballots for prom queen so that Carrie wins, then dump a bucket of pig's blood on her head in front of the entire senior class, humiliating her on the best night of her life.

This goes about as well as one would expect it to.

Carrie is regarded as a landmark horror film, seen as one of the best horror films of The Seventies and one of the best feature film adaptations of a Stephen King work, to the point where King himself feels that it's better than the book. The film was a major success for United Artists, grossing over $33 million at the U.S. box office on a budget of just $1.8 million. The ending is notable for being perhaps the first use of a "shock" ending in a horror film, which has since become a staple of the genre due to its influence. It was welcomed by immense critical acclaim -- unusual for a horror film, even today -- and was nominated for two Academy Awards[1] and a Hugo Award. There have since been several follow-ups/adaptations, none of which involved DePalma or King:

Not to be confused with the country singer, though her video for "Before He Cheats" is an Homage to the film. Or the 1952 film of the same name starring Laurence Olivier and directed by William Wyler. Or with that Carrie. Or that one.

Tropes used in Carrie include:

Chris: "The Carrie Whites of the world aren't meant to go out with the Tommy Rosses of the world! For if God had wanted that, he would have given her a kick-ass bod, and long hair, that layers easily and DANCES IN THE WIND!!"

The Principal: We're really sorry about this incident, Cassie...
Carrie: IT'S CARRIE!

... and as the lights dim to black, boos ring out from the upper balcony while below, others begin an ovation. ... Carrie has become an instant legend.
As the audience files out, some appear thrilled, others appalled; the word most frequently bandied about is "unbelievable". ... The ad copy, which read "There's Never Been a Musical Like Her," has proved oddly prophetic.