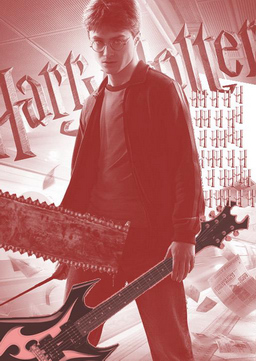 There are some Fan Fics that you won't forget. This is one of them. It is a Harry Potter fanfic, just like My Immortal. It's So Bad It's Good, just like My Immortal, it has extreme Canon Defilement, just like My Immortal. However, the two are different in one key detail. Whereas My Immortal was (in theory) written by a Wangsty 13 year old girl, this was (in theory) written by an insane 13 year old boy. So, instead of goffic sorrow and vampires, we get groinsaws and demonic astronauts in the very first sentence. Instead of various emo goff bands playing every night in the same wizard town for no apparent reason, we get Fuckslayer, a guitar from a dimension where all screamed for naught, wrought from the silver heart of heaven's false promise, laced with vessels that pulsed with angel's menstrual blood, hewn from the horns of Satan's generals. And yes, that is a direct quote.

What fanfic are we talking about? Why, 30 "H"s of course. 30 "H"s isn't actually the fanfic's name; like everyone's favorite Eldritch Abomination, it's just shorter and easier to remember than its real name of HHHHHHHHHHHHHHHHHHHHHHHHHHHHHH, and can be pronounced without first contracting bronchitis.

Also, the guy who wrote it does stuff with puppets. It's about what you'd expect it to be.