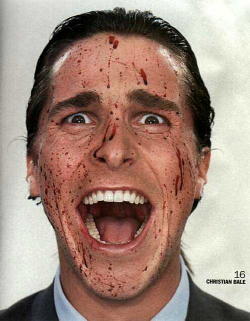 A book and movie (and soon-to-be[when?] Broadway musical), American Psycho by Bret Easton Ellis is the story of a true '80s businessman: rich, shallow, unhappy, self-absorbed, and... a serial killer.

Patrick Bateman is a yuppie's yuppie. He works on Wall Street, has a pretty girlfriend, and spends most of his life in restaurants. However, he is also an insane serial killer who often hallucinates and murders people for no reason at all. In increasingly horrific ways. Most of the people in Pat's life don't really know anything about him, but then, he doesn't know anything about them either. Most of the people he knows cannot even be bothered to remember his name—but he isn't sure about theirs, so it all evens out. There is no one who listens to him; he confesses at least once a week, but no one seems to notice—or care. And Ellis explains that Patrick may not really be a serial killer. Patrick may just be harmlessly insane. Or bored. But Patrick may also be speaking the absolute truth. It's up to the reader to decide.

There is no true plot to the story. It ends as it begins; with Pat sitting in a restaurant, making boring small talk with boring people. Above him is a sign reading 'This Is Not An Exit'. His confession, his telling this to us, has meant nothing. (The book also crosses over with The Rules of Attraction, but like everything else, it's of no consequence whatsoever.)

The book has a sort-of sequel, Lunar Park, which was published in 2005. Lunar Park blurs the lines between fiction and reality, and features various literary representations of Patrick Bateman haunting a very fictionalized version of Bret Easton Ellis. The book mixes cheesy horror with advanced literature theory, Mind Screw and Recursive Canon.

A movie sequel In Name Only to American Psycho is described at the bottom of this page.

Tropes used in American Psycho include:

The In Name Only movie sequel American Psycho 2: All American Girl has only a tenuous connection with the original. Narrator Rachel Newman (Mila Kunis) is studying criminal psychology at college, her ambition being to join the FBI at Quantico to hunt serial killers. Her classmates have the same ambition. And since only the top student gets an offer, she starts killing those ahead of her and anyone else who gets in the way. Good performances and plenty of Black Humor make it quite different in style to both the book and first movie (if you didn't like the movie, it could be considered a Surprisingly Improved Sequel).

...of course, the entire idea of a sequel to American Psycho is probably a deal-breaker to a lot of people. Particularly given that, frankly, this one's just another slasher movie.

Retrieved from "https://allthetropes.org/w/index.php?title=American_Psycho&oldid=1885838"
Categories:
Cookies help us deliver our services. By using our services, you agree to our use of cookies.