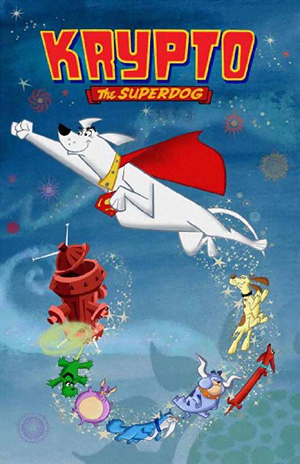 Krypto the Superdog received his own animated series in 2005 titled Krypto the Superdog. In this series, Krypto was allowed by Superman to live with a suburban Metropolis boy and his family, and had adventures alongside other characters such as Ace the Bat-Hound (Batman's dog) and Streaky the Supercat (in the comics, Supergirl's pet cat, but in this series, Streaky belongs to the girl next door to the family Krypto lives with).

Tropes used in Krypto the Superdog (animation) include:

Bull Dog: (To a de-powered and barely concious Hot Dog) It's looks that we shall call you "Chill Dog" (chuckles, Krypto and Ace stares at him akwardly and Snooky Face Palms

Retrieved from "https://allthetropes.org/w/index.php?title=Krypto_the_Superdog_(animation)&oldid=1902407"
Categories:
Cookies help us deliver our services. By using our services, you agree to our use of cookies.