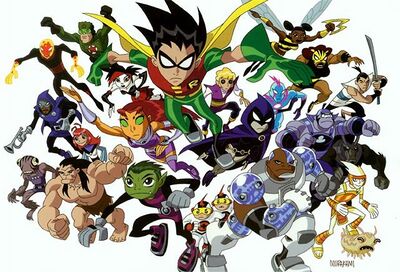 So you're a Badass Longcoat urban vigilante. You've had your secret origin, acquired a Trickster Mentor, a Sidekick... and a nemesis! You totally own the local mafia. But... you've been hearing reports of a secret race of freak people, who've started popping up recently. A city just down the road was recently attacked by Lovecraftian fish-men, and some computer guy in the nearby university was recently kidnapped by aliens (but was saved by you, 'cos you rock).

And then, suddenly, it all hits the fan. Turns out the guy you saved has invented a superintelligent computer, which promptly goes nuts and gets the aliens, the freak people and the the local mafia to team up and kick your ass.

So, what ya gonna do?

Why, form a Five-Man Band, of course! No, it's not necessarily a case of True Companions. In a Super Team, you just have to show up for the missions. The whole caring about the other members thing is entirely optional. Which may be just as well with this bunch of weirdos, righteous fools, back alley vigilantes, warrior ladies, aliens, robots, minor deities, fairy ninjas, normal people, and that annoying brat who you can't seem to get rid of.

What's that you say? Well, obviously it would be easier to show up for missions if you all lived in a cool mansion or Elaborate Underground Base of some sort, but then you run the risk of going straight through True Companions territory and right into some kind of Planet Eris sitcom/soap opera. And you don't want that.

If you and your team simply must get all "I'll do anything for you man! You're like family to me," then you'll become a Badass Crew, and probably have to come up some Badass Creed and the like. If they're actually related, they become a Super Family Team. If the team all has related powers and color-coded outfits, you're probably looking at a Sentai.

Examples of Super Team include: