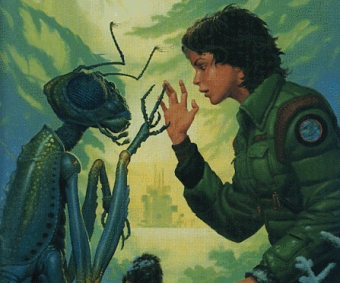 An early meeting between a Thranx and a human.

The Humanx Commonwealth is the general name given to a series of novels and short stories written by Alan Dean Foster that is set in a common science fiction universe. The setting was introduced in Foster's first published novel, The Tar-Aiym Krang, and has been the star franchise of his decades-long writing career. It has heavy roots in Space Opera as well as Speculative Fiction.

The Humanx Commonwealth is also the name of the major alliance of spacefaring species in the stories, the two principal members of which are humans and the insectoid Thranx. They are joined by a fantastically diverse cast of other species of varying levels of intelligence and technological progress. The spiritual counterpart of the Commonwealth is the United Church, an ecumenical council that embraces all religions under a single roof of universal tolerance. The major enemy of the Commonwealth is the AAnn, a xenophobic reptilian species that has its own empire and whose members constantly scheme against the humans and their allies (and each other).

There is a long Backstory involving Precursors, the Xunca, who held the entire galaxy under their dominion a billion years in the past, but fled in the face of a galaxy-devouring Great Evil. More recently (500,000 years or so), two powerful species called the Tar-Aiym and Hur'rikku fought a war that resulted in their mutual annihilation and the scouring of all higher life forms from a swath of star systems known as the Blight. Artifacts from these civilizations and others litter the worlds of the galaxy and provide a plentiful source of Lost Technology and MacGuffins.

The Humanx Commonwealth series is best known as the home of Phillip Lynx, aka Flinx, and his pet minidrag, Pip. Adopted at a young age, he manifested a talent for Empathy and promptly became embroiled in a number of unlikely schemes. Both the story and his powers expand over time to the point where he becomes the Chosen One who is fated to save the universe from the same Great Evil that the Xunca failed to deal with billions of years ago. And he hates it.

The series tends to sit very heavily on the ideal side of the Sliding Scale of Idealism vs. Cynicism. In terms of hardness, it mainly falls under One Big Lie: FTL Travel is prevalent, as is FTL communication, although both are fairly expensive for the "average Joe". Distance is not ignored, but Space Is an Ocean is an inevitable consequence of the method of FTL travel, to the point where independent traders ply the spacelanes like merchantmen of the Age of Sail. Fantastic planets litter the galaxy, ripe for exploration but ready to entrap the unprepared. And there's always a Deus Ex Machina around the corner to save the day.

The major miniseries and story arcs are as follows:

A timeline of the Commonwealth universe can be found here.

Tropes used in Humanx Commonwealth include:
Retrieved from "https://allthetropes.org/w/index.php?title=Humanx_Commonwealth&oldid=1906996"
Categories:
Cookies help us deliver our services. By using our services, you agree to our use of cookies.