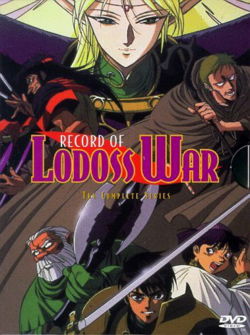 It first began as a series of role-playing game sessions, based on a Japanese game Sword World RPG which was heavily inspired by Dungeons & Dragons. It was recorded and transcribed into a series of novels by Ryo Mizuno. In 1990, it became an animated 13-part OVA series, and from then on it branched into movies, manga and TV series (some of which were alternate universe versions of the OVA, but which followed the story in the original novels more closely).

What is "it"? It is Record of Lodoss War, a sprawling epic which incorporates nearly every Tolkien-esque fantasy cliche in the book, but does so with style. The lovely art and character designs by Yutaka Izubuchi and Nobuteru Yuki make the OVA series a visual feast, in spite of its rather limited animation. The swelling orchestral score by Mitsuo Hagita makes it an aural feast as well.

As far as plot goes, it's standard RPG fare: Kid Hero Parn and his cleric buddy Etoh find themselves Walking the Earth, investigating evil after Parn gets himself thrown out of his hometown. Joining up with them are the wizard with the cool name, Slayn Starseeker, and his friend, the dwarf Ghim, who are on a quest to locate a missing White Mage named Laylia. They are soon joined by Deedlit, a wispy Elf who is Friend to All Living Things (and who falls for Parn like a cliff-diver in concrete shoes). At some point in the adventure, our heroes come upon the last member of their main party, the grungy, trouble-prone thief Woodchuck, whom they must rescue from prison (and who from there goes on to repeatedly demonstrate just why he was thrown into prison in the first place.) Our heroes must fight battles large and small -- with insane but beautiful witches, mountain-sized dragons, creepy dark elves, Badass Black Knights, evil armies, and the godlike forces which threaten to tear their world apart. When one of their number is eventually captured to power the Big Bad's End of The World as We Know It Machine, our heroes must snap into action to save their friend. Ultimately, Parn discovers that, to make everything right again, he must somehow restore the Balance Between Good and Evil, but just how does one do that, while the villains are hacking away at them and the world around them is crumbling into a pile of artfully drawn boulders? You'll have to watch to find out.

The production itself is played straight and with earnestness -- which is probably one of its greatest strengths, since it makes the events all the more epic and edge-of-your-seat dramatic as the story nears its end. Later on, the TV series which spun off from it would insert humorous Omakes at the end of every episode, which were either enjoyable comic interludes, or which undermined the whole tone of the series, depending on how you looked at them. Regardless of what came after, this OAV stands out as one of the better examples of pure, Dungeons & Dragons-inspired high fantasy (if not the best animated example ever).

See also Rune Soldier Louie, which is set in the same world as Lodoss, on the northern continent of Alecrast (but which is otherwise unconnected to the series).

Tropes used in Record of Lodoss War include:
Retrieved from "https://allthetropes.org/w/index.php?title=Record_of_Lodoss_War&oldid=1962836"
Categories:
Cookies help us deliver our services. By using our services, you agree to our use of cookies.