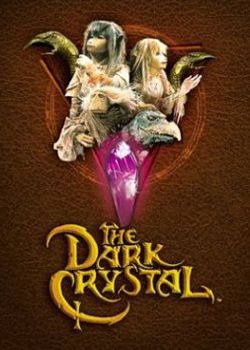 A 1982 science fiction/fantasy film directed by Jim Henson and Frank Oz with creature design by fantasy artist Brian Froud. Out of any of Jim Henson's works, this was probably one of the most complex, being done completely with animatronic puppets in the well developed setting of the planet Thra.

One thousand years ago, the titular crystal was whole. When it cracked on the day of the Great Conjunction of the planet's three suns, it split its UrSkek keepers into the Exclusively Evil and aggressive Skeksis and the Always Lawful Good but all too passive Mystics (aka urRu). A few centuries later, the Skeksis discover a prophecy that the elf-like Gelflings will heal the crystal, thus undoing their reign, they sent their Garthim to hunt them down and kill them all. All except for the protagonists Jen and Kira, the last of their kind.

Though it didn't do as well on its initial theatrical run, it spawned a cult following large enough to warrant a spin-off Manga prequel, Legends of the Dark Crystal by Tokyo Pop, a graphic novel prequel trilogy, The Dark Crystal: Creation Myths by Archaia Entertainment, and a sequel long stuck in Development Hell titled Power of the Dark Crystal. Netflix has now confirmed a prequel series due out in 2019, Dark Crystal, Age of Resistance.

Tropes used in The Dark Crystal include:
Retrieved from "https://allthetropes.org/w/index.php?title=The_Dark_Crystal&oldid=1874001"
Categories:
Cookies help us deliver our services. By using our services, you agree to our use of cookies.