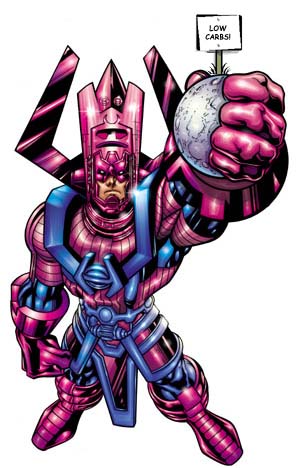 Good for your glutes!

This is the way the world ends, not with a bang, but a nom (all apologies to T.S. Eliot).

A character that not just destroys but eats planets for nourishment. They may suck the life-force from the biosphere, feed off its gravitic potential or magnetic field, or just start taking big bites out of the crust and mantle.

Planet Looters and Alien Locusts taken to the Nth degree. Compare Omnicidal Maniac. This is an X-1 class threat in Apocalypse How. When a character eats planet-sized portions (or eats so much they're the size of a planet) that's Big Eater.

Examples of Planet Eater include:

Retrieved from "https://allthetropes.org/w/index.php?title=Planet_Eater&oldid=1672475"
Categories:
Cookies help us deliver our services. By using our services, you agree to our use of cookies.