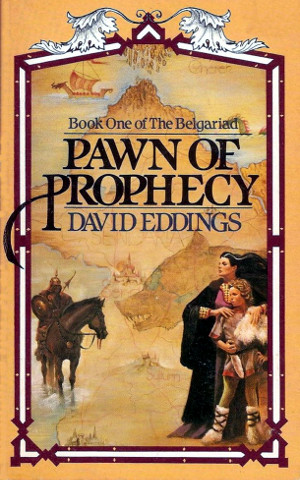 Before we get into this entry, I'd like to tell a story. A story of High Fantasy.

Once upon a time, a stone which possessed the power to change destiny was stolen. If this "Orb", belonging to the benevolent god Aldur, ever fell into the hands of the evil, maimed god Torak, the peaceful kingdoms of the west would fall to his might.

In pursuit of the Orb, however, followed the legendary sorcerer Belgarath, his gorgeous daughter Polgara, the humble Farm Boy Garion, and many other colorful allies: a thief, a berserker, a noble horseman, a paladin, a snotty princess, and so on.

The companions encountered kings, wizards, dryads, politics and treachery, but they ultimately succeeded in returning the Orb to its rightful place. There, Garion's true identity and destiny were revealed. And so Garion took up the massive Sword of the Rivan King and met the dark god Torak in personal combat.

That's the plot of David Eddings's Belgariad. And a whole lot of other things, too. The series is Strictly Formula, but that was Eddings' intention from the start. He wrote the series after taking a course on literary criticism, digging out all the tropes he could find, and deciding to actually build a good story with them. He also deliberately focuses on the characters rather than the tropes, injecting liveliness and sardonic humor into stock situations -- and the end result is a series that's incredibly popular and well-loved by fantasy fans the world over.

The original books were followed up with a sequel series, The Malloreon (which is basically "The Belgariad all over again but everyone is older", as the characters themselves quickly notice) and then much later by two standalone prequels, Belgarath the Sorcerer and Polgara the Sorceress, which tell the life stories of the titular characters. All of Eddings's works are likely Spiritual Successors of this one.

Books in the series

See also The Elenium, Eddings' third series and Spiritual Successor to The Belgariad and The Malloreon - albeit with a much stronger focus on over-the-top battles and Bond One Liners.

Tropes used in the Belgariad, the Malloreon, and the prequels:

In any case, all the sorcerers encountered in the books get immortality as a package deal with their powers, and witches like Vordai have a few more centuries than the average person in them (magicians' lifespans are never specified, though it's likely few reach their natural span anyway, considering how dangerous what they do is).