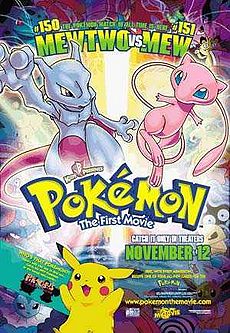 The very first movie in the Pokémon series of films.

A team of scientists creates Mewtwo, a superior clone of legendary Pokémon Mew. Angry at having been created and used by humans, he decides he's Gotta Kill'Em All.

It should be noted that this Pokémon movie is the only one that has real plot significance to the series, having plot elements set up throughout the first season of the show. Furthermore there is a made-for-television sequel called Pokémon: Mewtwo Returns that continues the plotline and themes.

Tropes used in Pokémon: The First Movie include:

Retrieved from "https://allthetropes.org/w/index.php?title=Pokémon:_The_First_Movie&oldid=1830690"
Categories:
Cookies help us deliver our services. By using our services, you agree to our use of cookies.