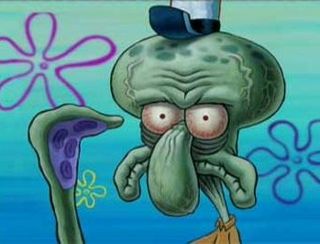 Does THIS look unsure to you?

A character (usually Badass) who can always be seen with a serious upside-down smile, even in the most pleasant of situations. Though it can be compared to The Stoic, Perpetual Frowner differs in the simple fact that rather than wearing a face of indifference, the character perpetually expresses the biggest, ugliest frown he or she can make on their face.

Usually comes in 3 varieties, 1) mopey and listless, 2). angry and angsty, 3). focused and serious. In many cases, the look of extreme tension continues even when they're asleep. For series where character background and development is allotted, it may later be revealed that the person expresses the demeanor as a result of a living or having lived a harsh or tragic life.

Extra points if the character also displays a habit of keeping his arms crossed along with the constant frowning for that extra pouty look.

If the Perpetual Frowner actually does smile, it's either a Crowning Moment of Heartwarming that signifies that the character has found a reason to be happy and enjoy life again, or one of the most potent sources of Nightmare Fuel you will ever come across.

If the expression is not voluntary but the result of damage to nerves or the like, it falls under Frozen Face.

Examples of Perpetual Frowner include:

Retrieved from "https://allthetropes.org/w/index.php?title=Perpetual_Frowner&oldid=1893656"
Categories:
Cookies help us deliver our services. By using our services, you agree to our use of cookies.