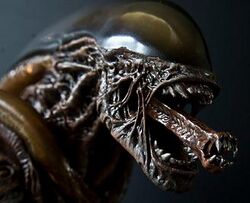 A mouth inside a mouth looks pretty scary, but it'd actually be pretty inefficient for consuming prey, when you think about it.

Like the Rule of Cool and the Rule of Funny, the Rule of Scary says that if it's creepy enough, it doesn't matter how illogical it is. Why the maniac has a hockey mask, where he got it, and how it survived a shotgun blast to the face are irrelevant. All that matters is that it creeps you out.

Most effective formulas for scary:

If you cannot tell from the listings below, this is overwhelmingly a Film trope. Whether this is because producers don't care about silly things like logic, or they just don't have enough time to explain every little idiosyncrasy is a debate that will rage on for as long as the medium exists.

Compare Fridge Logic. Offscreen Teleportation is a Sub-Trope of this, as is Body Horror.

Not to be confused with any rules used by Richard Scarry.

Examples of Rule of Scary include:

Retrieved from "https://allthetropes.org/w/index.php?title=Rule_of_Scary&oldid=1824659"
Categories:
Cookies help us deliver our services. By using our services, you agree to our use of cookies.