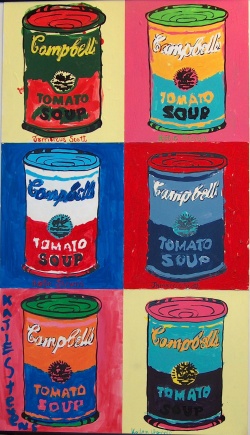 Now put the cans in order according to their dominant colors' place in the spectrum, or you won't be allowed to edit this page.

"Soup cans" is a derisive term for bizarre and disconnected elements included in a game purely to serve as an obstacle to the player. The thematic equivalent of Fake Difficulty, and the nonviolent equivalent of Everything Trying to Kill You.

In a game which includes puzzles, often, anything at all can be a puzzle. Using a Mastermind game as the electronic lock on your door might seem like a dumb thing to do, but at least the one is associated with the other. To reach the true height of Solve the Soup Cans, it's not merely the case that the puzzle seems like a contrived way to bar the player's progress: it doesn't even make sense that the puzzle should be an obstacle.

It's like this. You walk into a room. There's a chessboard in the middle, and an exit at the opposite end. It seems like you ought to be able to just walk right past the chessboard and exit via the opposite door. But you can't. The chessboard is a puzzle, and, like vampires and running water (mostly), the player can not cross the path of an unsolved puzzle.

Less egregiously, the puzzle may have a direct effect on the game world (when solved, you are given some key item, or prompt a response from some NPC), but the connection between cause and effect is not conveyed beforehand, nor is the effect something that follows naturally from solving the puzzle. Needing to Solve the Soup Cans reverses normal puzzle-solving logic: it's not that you want to accomplish some goal, and have to solve the puzzle to get to that goal, but rather, you've got to solve the puzzle because the puzzle is there, and that's what puzzles are for, and the fact that you end up closer to your goal is, at least in terms of the storyline, more or less coincidental.

Used poorly, Solve the Soup Cans reduce the player to The Fool, just purposelessly blundering forward solving puzzles at random, hoping something good will happen. When this occurs in Edutainment Games, it's a case of Alphabet Soup Cans.

This class of puzzle ran amok in the middle-era Adventure Game, and can sometimes still be seen in the Action Adventure genre, especially during the non-action-oriented scenes of Survival Horror.

Named for a particular puzzle in The 7th Guest where the player must spell out a message by rearranging cans of soup. Soup cans whose only vowel is Y.

A really bizarre form of Only Smart People May Pass with even less justification. See also I Can't Reach It when the playing character is unable to accomplish a normally-possible physical act, just for gameplay reasons.

Examples of Soup Cans include:

In a recording the museum's creator, Professor Windlenot, even lampshades how the puzzles become annoyances when there are real emergencies going on (like Ixupi on the loose).

Another puzzle involves the protagonist's ancestor picking the lock of the door of the suspect's art gallery. Too bad that said door has what seems to be the most complex tumbler lock ever built...

To top the whole shenanigan off, an optional skit features Lloyd expressing interest in trying a Ymir fruit for himself. Now, up until this point, anytime you make a mistake in the overly-tedious series of maneuvers required to get the fruit into a position where anyone's willing to expend the effort to reach over and grab it, you could knock a new one into the water and try again. But once you finally nab one, it is apparently the last one in the world ever (those cocksucker fish took all the rest), because everyone gets on Lloyd's case for wanting to eat it when a sick woman needs it as medicine.

Retrieved from "https://allthetropes.org/w/index.php?title=Solve_the_Soup_Cans&oldid=1708914"
Categories:
Cookies help us deliver our services. By using our services, you agree to our use of cookies.