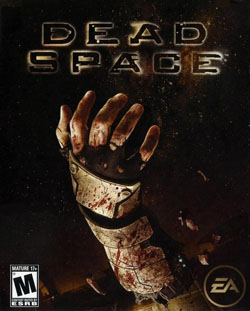 Dead Space is a video game released for the PC, Xbox 360 and PlayStation 3. It is the first game in the Dead Space series.

The game takes place in the Ishimura, a spaceship of the Planet Cracker class, a series of ships which find mineral-rich planets and literally lift whole chunks of them into space for mining. During a mining excavation on a faraway planet, the miners discover a strange artifact of apparently alien origin. The artifact, dubbed the Marker, was apparently causing problems amongst the colonists who were working on the surface of the planet. Eventually, it's decided to transport the Marker to the Ishimura. It did not end well.

Luckily (or not), a Distress Call managed to get sent, and a crew of (two) Space Marines, led by Sergeant Zach Hammond, is sent to investigate. Along with him are two engineers, tasked with helping repair any damage done to the Ishimura that might have caused the distress call: systems engineer Kendra Daniels and mechanical/electronic engineer Isaac Clarke. Clarke also has a personal reason for undertaking the mission: his girlfriend Nicole is part of the Ishimura's crew, and he fears for her safety.

What they find is the ostensive definition of Hell on Earth (or rather, In Space!): the crew of the ship has been annihilated by a series of creatures (dubbed Necromorphs by the Ishimura's scientists) who have the ability to infect dead tissue to raise their numbers. This results in zombie-like mutated monsters infesting the entire ship. Even worse is that there is apparently a cult called the Unitologists, who believe that the Marker is actually of divine origin. The name of the game is now not rescue, but survival: Isaac and the rest of the rescue team must now find a way off the ship. Using his engineering skills and whatever hastily-weaponized power tools he can find, Isaac must help his fellow survivors escape this hellish situation... if he doesn't crack first.

Gameplay wise, Dead Space shares a lot of similarities Resident Evil 4. There is one button to aim and one button to fire; ammo, health, audio logs and money are found scattered about the Ishimura, but are in limited supply, so the player has to ration everything accordingly (though Isaac will almost always manage to find health on corpses when he really needs it), and there is a store where Isaac can buy ammo, new weapons, upgrades for his weapons, and upgrades for his suit, and store extra items cluttering up his inventory.

An interesting gameplay variation is that Necromorphs cannot be killed with head or body shots. Instead, Isaac has to shoot the limbs off of Necromorphs to "kill" them. And since the Necromorphs come in many different shapes, quite a bit of strategy is required. Isaac also has a Stasis module which can slow enemies down to the point of looking frozen, and levitate objects to solve puzzles.

In 2011, Iron Monkey Studios released a game for the iPhone and iPad also called Dead Space. It takes place in the same universe, but has more to do with Dead Space 2 than Dead Space.

Please Note: This game has a separate page for the sequel Dead Space 2. Please add game-appropriate tropes to the correct page.

Tropes used in Dead Space (video game) include:
Retrieved from "https://allthetropes.org/w/index.php?title=Dead_Space_(video_game)&oldid=1886404"
Categories:
Cookies help us deliver our services. By using our services, you agree to our use of cookies.