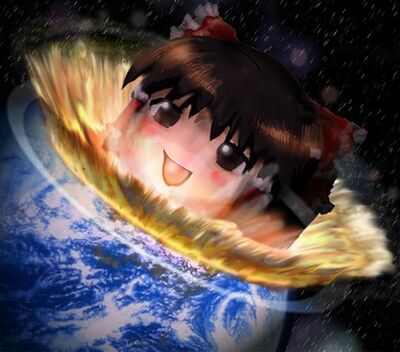 In most stories, the Big Bad is the one who wants to bring about The End of the World as We Know It with anything from an Earthshattering Kaboom to a demonic invasion. Usually it's because they will become The Antichrist and are prophesied to destroy the world.

You can understand why The Hero will get very confused when he finds out it's actually their Love Interest, their younger or older sister, his childhood friend (either Unlucky, Victorious or Forgotten) or another member of the Five-Man Band (most likely The Lancer or The Chick) who is The Chosen One fated to destroy the world. The reasons vary, maybe they have inherited a form of Enemy Within capable of a truly Unstoppable Rage that can destroy worlds, or have been possessed by an Eldritch Abomination, or most heart wrenchingly they are completely innocent yet their mere existence acts as a Butterfly of Doom that can destroy the Cosmic Keystone. Either way, they're going to somehow bring about the apocalypse in some form Because Destiny Says So.

Needless to say, the villains (and certain heroes) who realize this want to nip this in the bud by killing said Chosen One. Of course, seeing as that person is one of their True Companions (usually a Love Interest), the heroes say Screw Destiny and try to protect the chosen one from others and potentially, even themselves. Then again, some villains (and certain heroes) may well want them to destroy the world, and kidnap them in order to brainwash or sacrifice them in a manner that kick starts the apocalypse. In which case the heroes have to find a way to stop the world ending and save their friend... and both may be mutually exclusive.

Sadly, because You Can't Fight Fate these attempts to prevent the cataclysm may become self fulfilling because Prophecies Are Always Right (in such a case, its a Downer Ending). Optimistically, their friend's efforts and The Power of Trust may embolden them to become an Anti-Anti-Christ and successfully rebel against their destiny... even if it requires the ultimate sacrifice.

Prophetic Fallacy may also be a cause for the villain's alarm, or maybe The Powers That Be were merciful.

This is more of a plot than a character (it could be either). Much like Barrier Maiden, this trope is open to both genders. See also/contrast Big Bad Friend, Save This Person Save the World and Barrier Maiden. May well become an Anti-Anti-Christ.

This trope is inspired by if not outright based on the Harlot from the biblical Book of Revelation.

Subtrope of the MacGuffin Girl.

Examples of Apocalypse Maiden include:

Retrieved from "https://allthetropes.org/w/index.php?title=Apocalypse_Maiden&oldid=1764570"
Categories:
Cookies help us deliver our services. By using our services, you agree to our use of cookies.