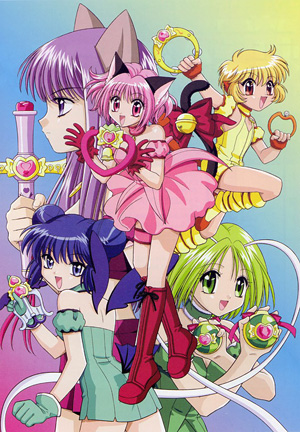 An iconic series that brought the five-girl team of Magical Girls into the 2000s, Tokyo Mew Mew started as a Nakayoshi artist's desire to do a series about a Catgirl, and ended up as a sweet tale of choosing the right guy, protecting the environment, and throwing some sparkly Stock Footage around to solve the world's problems.

Ichigo Momomiya's only care in the world is getting kendo idol Masaya Aoyama to notice her. Since he's interested in environmental protection, she invites him on a date to an exhibition about "Red Data Animals", a list of endangered species.

Little does she know that she is one of five Tokyo schoolgirls "chosen" by the Earth, possessed of a unique DNA pattern allowing her to host the genes of the Irimote Mountain Cat, one of the Red Data Animals. As part of the secret "Mew Project", she is shot by an injection gun from a mysterious cat statue atop a cute cafe.

Now the DNA of the wildcat is running through her, and she's picked up some very odd abilities, such as excessive sleepiness and landing perfectly on her feet. Not only that, but she can use a Transformation Trinket to transform into a magical catgirl and defeat the parasitic aliens that are transforming normal animals into monstrous Chimera Anima.

Recruited by the masterminds behind the Mew Project, Ichigo ends up working at the cafe as a waitress by day and alien-hunting catgirl by night, with the promise that she will return to normal when the threat has passed. What's more, there are four other subjects of the Mew Project to find, and a sinister extraterrestrial plot to thwart.

There is also a manga-only sequel written by the head illustrator after the head writer left. Tokyo Mew Mew a la mode renders Ichigo utterly useless (no, really) so that a shiny new character named Berry Shirayuki/Mew Berry (Tokyopop name: Berry) can take her place. Many fans like to pretend it doesn't exist.

The manga was licensed by Tokyo Pop and the anime by 4Kids Entertainment (where it's known as Mew Mew Power). Only the first half of the series has been released in the United States so far, and because of Fox's odd airing schedule, you're usually likely to only see the first twelve episodes. More recently, it was given the Gag Dub treatment in Tokyo Mew Mew in a Nutshell. In addition, Kodansha USA has re-licensed the the original manga in omnibus form, coming this fall.

4Kids lost the rights to the first half of the show, and have been unsuccessful in attempting to purchase the rights to the second half. It was popularly assumed, but not proven, that a relicensing like One Piece had would hang on the success of the English release of Mamotte Lollipop.

Ikumi Mia loves puns, and Tokyopop's translators are not purists. These factors together create a lot of confusion as to what things are called. Regarding names in the original version:

Tropes used in Tokyo Mew Mew include:
Retrieved from "https://allthetropes.org/w/index.php?title=Tokyo_Mew_Mew&oldid=1729541"
Categories:
Cookies help us deliver our services. By using our services, you agree to our use of cookies.