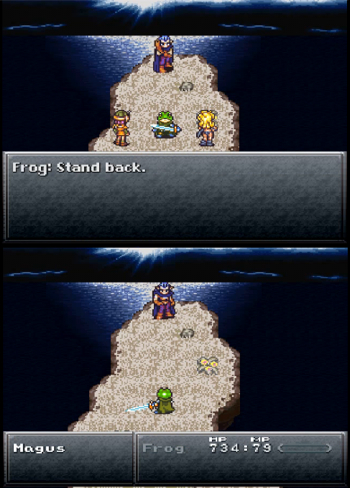 Come, let us finish this charade!

In video games where you control multiple characters at a time (almost always RPGs), a boss that you have to fight with just one character, usually the lead. Either the other party members are missing or incapacitated somehow, or it's simply something he's got to do himself. Often a Climax Boss, or an enemy with personal significance to the other duelist.

Usually the boss's stats are lowered to compensate for your reduced fighting strength. The challenge is finding a way to win with limited options available to you.

Sometimes you have to do this without your weapons as well.

Worthy Opponents and Blood Knights are the opponents most likely to try this.

Do not confuse with the (deliberately) similar-sounding Dual Boss. If the Duel Boss is also the Final Boss, this trope overlaps with In the End You Are on Your Own.

Examples of Duel Boss include:

Retrieved from "https://allthetropes.org/w/index.php?title=Duel_Boss&oldid=1904893"
Categories:
Cookies help us deliver our services. By using our services, you agree to our use of cookies.