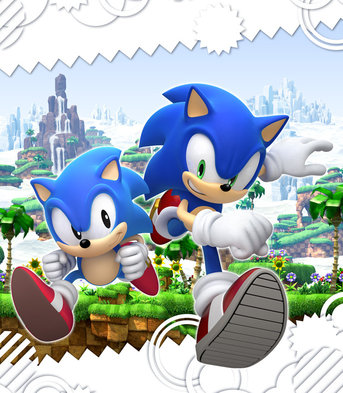 "Double the speed, double the fun!

Sonic Generations is a main series title in the Sonic franchise, released in 2011 for the Play Station 3, Xbox 360, the PC (via Steam) and the Nintendo 3DS to commemorate Sonic's 20th Anniversary. The 360/PS3/PC versions of the game utilizes both 2.5D (mostly in the "Classic Sonic" sections) and a mix of 2.5D and 3D gameplay in the style of Sonic Colors Wii and Sonic Unleashed HD's daytime stages (in the "Modern Sonic" sections), while the 3DS version's "Modern Sonic" levels are stylistically similar to the Sonic Rush Series series and Sonic Colors DS. Both HD console versions and the 3DS version support stereoscopic 3D, though gamers without a 3D TV aren't required to use one to play the HD console versions as they can be played on any TV and the stereoscopic 3D on the 3DS version is not required to play the game properly and can be turned off, as it is typically used for visual effects on that version.

The story is that Modern Sonic and his friends are celebrating his birthday when a mysterious new enemy named 'Time Eater' crashes the party and sends them back to the past where Sonic meets his younger self, Classic Sonic. They both discover the world is losing its color, their friends have been petrified and the timeline has been disturbed. Both Modern and Classic must team up to stop this mysterious enemy, rescue their friends, restore color to the world, and fix the timeline.

Their journey takes them through three eras: Classic, Dreamcast, and Modern. The 3DS and console versions have different levels, and share only the famous Green Hill Zone from Sonic 1.

Here's where you can discuss all matters pertaining to this game.

Tropes used in Sonic Generations include:

Classic Eggman: Wow. Will I really get that crazy?

Restarting an act lets you try for the Perfect Bonus again, at the cost of a life[25]. Strangely, dying before reaching your first checkpoint eats up one life and sets the clock back to 0:00:00, as if you had restarted the act, but the Perfect Bonus is no longer attainable[26].
It's possible to earn S-ranks in the challenge levels even if you lose a life, as completion time is the only deciding factor. But since dying will usually set you back a considerable amount of time, a No Death Run is still recommended.

To add insult to injury, even if you do manage to win, you are almost guaranteed to be awarded a D-grade, because once you go over S-grade time, every 5-15 seconds afterward will drop you one more full letter grade. By the way, since this is a challenge level, you can't equip any skills, and you can't boost your grade by collecting rings (AND unlike most challenge levels, there are no pick-ups to reduce your time). Even if you've managed to get an S-grade in the act proper, you will find yourself 10% more bald than when you first started playing the Doppelganger Race. Have fun.