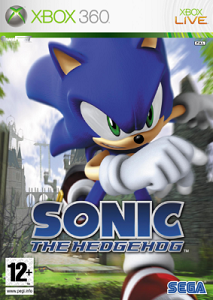 Princess Elise of Soleanna is the key to the "Flames of Disaster," which Dr. Eggman wants to combine with the power of the seven Chaos Emeralds to rule through all time. Just happening to be around town, Sonic the Hedgehog must protect Elise from Eggman and, with his friends, foil the mad doctor's scheme. Meanwhile, a telekinetic hedgehog from the future aptly named Silver (even though he looks like he's actually white) and a cat named Blaze come to the present to prevent their Bad Future by destroying the "Iblis Trigger." Elsewhere, Shadow the Hedgehog and Rouge the Bat must contend with Mephiles the Dark, who wants to activate the Iblis Trigger.

Released near the end of 2006 for the Xbox 360, and then a few months later for the Play Station 3, Sonic the Hedgehog was an attempt by Sega to undo the Polygon Ceiling that the series had been struggling with for some time, such as camera issues and occasionally wonky controls and physics.

However, by forcing the game out for a Christmas release and developing it for two advanced, brand-new consoles, what we got instead was a very Obvious Beta that not only failed to address the flaws the franchise was hit with in the 3D realm, but actually accentuated them. The controls were slipperier than ever, the camera was even more offensive, the Havok physics engine was clearly implemented for the sake of having a physics engine, and the loading times were some of the worst to ever hit a console game -- and that's not even mentioning the tangled web that was the plot. To add insult to injury, this was the title that marked the Hedgehog's 15th anniversary, and somehow, after spending an extra six months working on a Play Station 3 port, they somehow managed to make it even worse without fixing any of the previous version's issues.

With Sonic being a certified Long Running Cash Cow Franchise, however, the game still sold well enough to be inducted into the Xbox's Platinum Hits line. Even to this day, you may sometimes find, hiding in some obscure corner of the Internet, a few valiant defenders of the game. Your Mileage May Vary as to whether the game is playable, outright broken, or if nothing else had some good ideas going -- but the one thing most people agree on is that most of the ideas were not implemented well, and that they alone were insufficient to save the game.

This was the nadir of Sonic's career, but Sega, luckily, realized it; they have all but disavowed the game and have made sure to produce, by general reception's consensus, steadily better games since. And if nothing else, even the Broken Base can agree that things can't get any worse for the series than they did with Sonic '06. However the game is still canon, as games such as Sonic Generations have demonstrated.

Tropes used in Sonic the Hedgehog (2006 video game) include:

Eggman: "He eats dimensions for lunch!"

Mephiles the Dark: It's futile. The world will betray you. Why fight at all? Why risk your life for those who will persecute you later?
Shadow the Hedgehog: If the world chooses to become my enemy... I will fight like I always have!