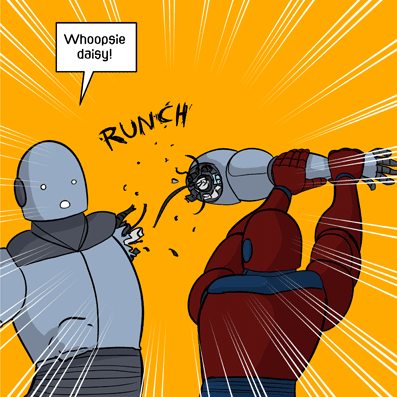 In webcomics and cartoons especially, characters in great pain will demonstrate this pain by making frequently deadpan statements, along the lines of "The truck lodged in my stomach is excruciating" or some such.

Often justified by the character being resistant to pain in some way or a Badass. In Real Life, a person might not notice an injury right away due to adrenaline, shock, or panic, all of which can eclipse pain. which may be used to make a Mortal Wound Reveal more shocking.

Contrast with Minor Injury Overreaction, which is a direct inversion of this trope. Compare Only a Flesh Wound, I Ain't Got Time to Bleed.

Examples of Major Injury Underreactions include:

Retrieved from "https://allthetropes.org/w/index.php?title=Major_Injury_Underreaction&oldid=1886923"
Categories:
Cookies help us deliver our services. By using our services, you agree to our use of cookies.