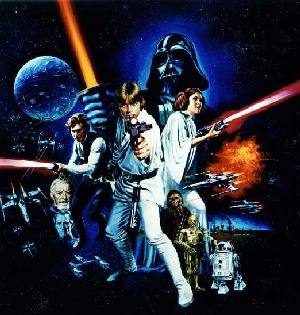 A New Hope, or more precisely, Star Wars: Episode IV - A New Hope (originally released as and still simply called Star Wars by many fans) was the 1977 film that marked the first chapter of the Star Wars saga. It's the film that started it all, giving birth to one of the most beloved and long-lived franchises in the history of cinema -- and entertainment in general. Though most people wouldn't have guessed that at the time...

George Lucas had a lot of trouble getting a studio to back him up, and even Twentieth Century Fox would have dropped the film if not for the support of Alan Ladd Jr. The film also had a Troubled Production, both with the live action and the special effects, the latter because the newly formed Industrial Light and Magic had to spend the first several months just making the technology required to film the scenes Lucas wanted.

This left Lucas exhausted after the film was finished, and he didn't direct another film for over 20 years [1]. It seemed the film would suffer an even worse fate.

Of course, we all know that didn't happen.

The Star Wars movies are perhaps the most well-known Science Fiction/Space Opera films ever, but A New Hope in particular is the most famous among the six. With its box office gross adjusted for inflation, it is the second highest grossing movie ever, surpassed only by Gone with the Wind. So famous is the film, in fact, that this page isn't even going to bother summarizing the plot. In fact, that plot itself is in some ways irrelevant. It's all about how it's presented.

A New Hope is the Trope Namer for:
Tropes used in A New Hope include:
Retrieved from "https://allthetropes.org/w/index.php?title=A_New_Hope&oldid=1921899"
Categories:
Cookies help us deliver our services. By using our services, you agree to our use of cookies.