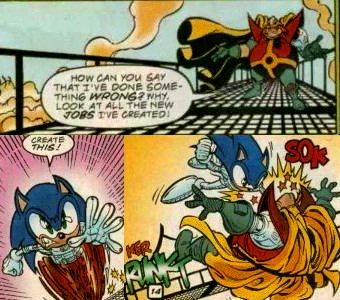 You've Seen It a Million Times. We know this. But it's still a joy to watch.

A bad guy will taunt, cajole, or in some way try to deceive the good guy/s with big words, possibly flowery language, or good ol' fashioned Trash Talk. But the good guy/s will have none of it. Instead, they'll snatch a word out of the enemy's tirade, tack a hard, defiant, "THIS!" to the end of it, and unload on their enemies.

In lowbrow games of Volleying Insults, "this" is one's crotch, indicated with a gesture so the other doesn't miss the point.

Compare/Contrast with I Will Show You X, in using someone's own wording in a retort to them, except that I Will Show You X is more specifically about what the character saying it will DO, whereas in Verb This there's no "I" in it and it could just as easily be referring to some external circumstance.

Usually doubles as a Facing the Bullets One-Liner, Pre-Mortem One-Liner and/or Pre-Ass-Kicking One-Liner as well. Can be someone's Moment of Awesome if pulled off properly.

Compare Shut UP, Hannibal and Punctuated! For! Emphasis!. Also, Talk to the Fist and I Will Show You X.

Examples of Verb This include: