Batman Can Breathe in Space 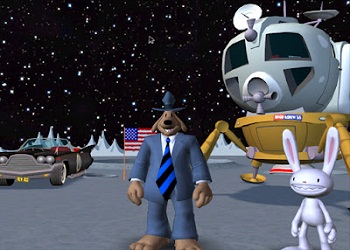 "Guess those candybutt astronauts didn't have the stones to try it."

Slippy Toad: Hey, this is no time for chitchat, guys! Shouldn't we be worried about Fox? He's out there with no air! How's he supposed to breathe?
Peppy Hare: Bah! Way to go, Slippy. No one would've even noticed if you hadn't opened your big yap!

Find yourself in space without an oxygen tank? Not a problem! Breathing in the vacuum of space is just as easy as breathing on Earth, especially if you are a superhero or somehow able to leave the atmosphere under your own power.

May also be related to Super Not-Drowning Skills and Harmless Freezing, since breathing while underwater or in a solid block of ice isn't really a big deal either.

In Real Life, people can theoretically survive in space for a few moments, given medical assistance afterwards. It is recommended to not hold your breath, as the internal pressure will cause your lungs to rupture.

It should also be noted that the Milky Way does have an extremely thin "atmosphere," held in place by the gravity of all the stars in the galaxy, but it's far too thin to do a living Earth creature any good.

Often a form of Artistic License Physics. When characters aren't just hanging out but talking in the great vacuum, you have Space Is Noisy. A form of The Needless. Also a form of Beyond the Impossible unless canon explains how they can do it.

Examples of Batman Can Breathe in Space include:

Early in the first season Sonic wing-walks the Blue Tornado into space, and promptly freezes when outside of Earth's atmosphere. He is fine when they re-enter it. Their own universe must have different laws, or something...

Sam: So let me get this straight: We can breathe on the moon?
Max: I guess those candy-butt astronauts never had the stones to try!

Dr. Evil: It's a flu shot. You've been in the coldness of space, I don't want you to get sick.

But convincing one's own body that it doesn't need to do one of its most important functions was an another matter entirely. One of the main characters used up all his oxygen (it's a long story) and ended up suffering an extermely frustrating and futile desire to breathe... for a good six hours after his last bottle died. Though, he was still new to his powers yet.

Several novels stated that early on in their evolution, the Zerg assimilated a naturally spacefaring species, allowing their biology to adapt to the harshness of space, just as it had adapted to every other hostile environment they encountered. It also explains that the Protoss have no need of mouths or noses since they communicate telepathically, are photosynthetic, and respirate via cutaneous gas exchange.
No recognizable nostrils on their heads, anyway. They could have nostrils elsewhere hooked up to an air supply and tough enough skin to act as a natural space suit. They are an engineered species created by the Xel'Naga, after all.
The Protoss all have invisible shields surrounding them. This is probably how they survive in space generally, and if they get shot enough to lose the shield, they can either hold their breath till it comes back online or it won't matter because they'll be dead.

"Wait Uncle Scrooge you need a suit out there! How are you alive? You need heat! Also air!"

Cheesecake: (floating through space) Oh well. At least the continuity in this random series is non-existent. By the next episode, I'll probably be back home, safe and sound! Hey, wait a minute! How am I breathing?

"Helicopters in space? How does that even work?!"
"No time to quibble over logic!"

Space was a lot different way back then. Breathing devices and spacesuits were optional.