The Pirates of Dark Water 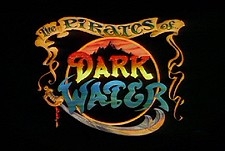 Short-lived but fantastic 1991-1993 Hanna-Barbera cartoon series which switched off between syndication and ABC. It began as a five-part miniseries which aired on Fox Kids as simply "Dark Water".

Ren is the prince of a fallen kingdom, and he has to find the Thirteen Treasures of Rule to restore it to its once pristine glory. Rounding out his "unlikely but loyal crew of misfits" are ecomancer Tula, roguish Ioz, and the monkeybird Niddler.

However, Ren learns that his quest is far more urgent than simply personal career advancement; the menacing substance called dark water that consumes everything it touches is spreading and it threatens to destroy the world. Only the thirteen treasures can stop it and Ren must find them before it is too late.

It was notable because it was one of the first children's series to have an in-depth, epic storyline. Alas, the production costs were too high, and the art quality suffered a noticeable drop on its second Channel Hop. Ultimately, it was canceled 21 episodes into its run (only eight of the thirteen treasures had been collected). All 21 episodes were released on DVD on August 31, 2010, listed as The Complete Series [dead link].

Tropes used in The Pirates of Dark Water include:
Retrieved from "https://allthetropes.org/w/index.php?title=The_Pirates_of_Dark_Water&oldid=1928208"
Categories:
Cookies help us deliver our services. By using our services, you agree to our use of cookies.