Jump to content
(Redirected from Willy Wonka and The Chocolate Factory) 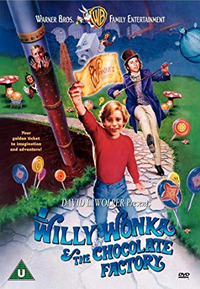 Author Roald Dahl adapted his own novel, Leslie Bricusse and Anthony Newley wrote a memorable musical score, and producer David Wolper wisely cast Gene Wilder as Wonka in this film musical about a contest put on by an often-sadistic candymaker. Harkening back to the classic Hollywood musicals, Willy Wonka is surreal, yet playful at the same time, and suffused with Harper Goff's jaw-dropping color sets, which richly live up to the fanciful world found in one of the film's signature songs, "Pure Imagination." Wilder's brilliant portrayal of the enigmatic Wonka caused theatergoers to like and fear Wonka at the same time, while the hallucinogenic tunnel sequence has traumatized children (and adults) for decades, their nightmares indelibly emblazoned in memory like the scariest scenes from The Wizard of Oz.

(Description copied from "Brief Descriptions and Expanded Essays of National Film Registry Titles", which the Library of Congress has placed into the public domain. See also the LOC's Expanded essay by Brian Scott Mednick.)

In 2005 it was remade as Charlie and the Chocolate Factory, starring Johnny Depp as Willy Wonka.

The film was named to the National Film Registry in 2014.